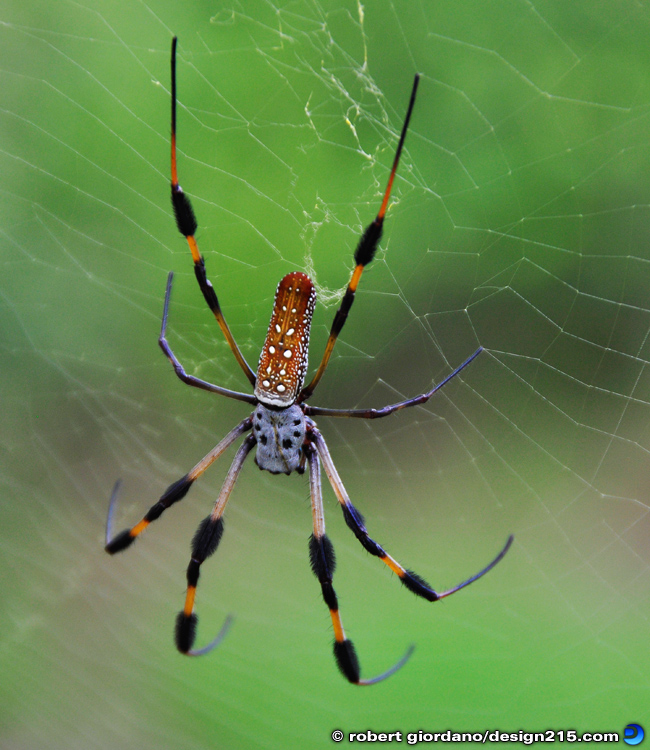 Photograph of a Golden Silk Spider in a homeowner's yard, Fort Lauderdale, FL. These spiders or Nephila are a genus of araneomorph spiders noted for the impressive webs they weave. Nephila consists of numerous individual species found around the world. They are also commonly called golden orb-weavers, giant wood spiders, or banana spiders. The females usually eat their mate.

The name of the golden silk orb-weavers refers to the color of the spider silk, not the color of the spider itself. Yellow threads of their web shine like gold in sunlight. Experimental evidence suggests that the silk's color may serve a dual purpose: sunlit webs ensnare bees that are attracted to the bright yellow strands, whereas in shady spots the yellow blends in with background foliage to act as a camouflage. The spider is able to adjust pigment intensity relative to background light levels and color; the range of spectral reflectance is specifically adapted to insect vision.

Adjacent to one face of the main orb there may be a rather extensive and haphazard-looking network of guard-strands suspended a few inches distant across a free-space. This network is often decorated with a lumpy string or two of plant detritus and insect carcasses clumped with silk. It is thought this suspended debris acts as a cue for birds to avoid blundering into and destroying the main web. Photo Copyright 2008 Robert Giordano.