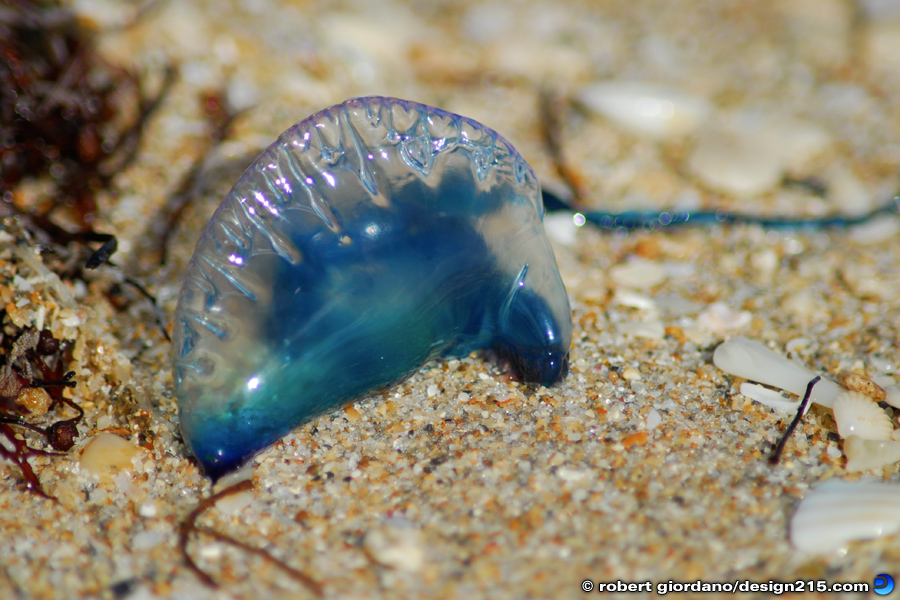 Photograph of a Portuguese Man o' War on Fort Lauderdale beach. Contrary to popular belief, the Man o' War is not a jellyfish. It is a specialized siphonophore. Its blue "balloon" is an air bladder which it inflates to float on the surface of the ocean. Long, venom filled tentacles dangle beneath the surface, paralyzing fish that come in contact with them.

Detached tentacles and dead specimens (including those which wash up on shore) can sting just as painfully as the live creature in the water, and may remain potent for hours or even days after the death of the creature or the detachment of the tentacle.

Stings usually cause severe pain to humans, leaving whip-like, red welts on the skin which normally last about forty-five minutes after which it should subside. However, the venom can travel to the lymph nodes and may cause, depending on the amount of venom, more intense pain. A sting may lead to an allergic reaction. There can also be serious effects, including fever, shock, and interference with heart and lung action. There have even been deaths, although this is rare. Medical attention may be necessary, especially where pain is intense or there is an extreme reaction. Photo Copyright 2008 Robert Giordano.